After a seven year delay, the big band recording of ten Pepper Adams compositions has finally been released. What a relief! Hugs to all my Kickstarter contributors who so graciously made this happen, who so patiently awaited for this recording to see the light of day. The various twists and turns that we experienced are detailed in the liner notes, reprinted below.

The tunes are available digitally on CD Baby: https://www.pepperadams.com/Compositions/Session6/index.html
Physical CDs will be produced, but not before the first half of my Pepper Adams biography is published.

I’ve heard from Motema, and they have rejected putting out the CD, even despite an earlier commitment to at least release it digitally. The backup plan was to get re-engaged with the folks at the University of Illinois. Both Chip McNeill and Glenn WIlson have record labels they record with, and the University also has its own label. As soon as things are resolved I'll let you know. The date still needs to be mastered. In the meantime, enjoy the music I've sent you. As always, thanks so much for supporting my ongoing work on the great Pepper Adams.

Since I no longer had a label committed to releasing the date, it became incumbent upon Chip and Glenn to either find another label or have the university’s label release it. Illinois then moved ahead with the project. They reinstated all the edits, had Wickliffe engineer the two deleted tracks (“Patrice” and “Doctor Deep”), and master the final product. On July 8, 2014, five months later, I explained the situation:

I’m happy to report that the University of Illinois is currently working with engineer Paul Wickliffe to reinstate a few solos and edit two extra tracks. Once this is complete and the tunes are reordered, UI will be shopping the date to other labels, now that Motema has suspended their Pepper Adams series. I'll update you as I learn things. Again, thanks so much for your support and patience.

Throughout the following months, I stayed in touch with Chip and Glenn. A year later, I was relieved that things were finally in place. Accordingly, on September 8, 2015, I sent my Kickstarter donors this update:

I’m very happy to report that Armored Records will be releasing the Pepper Adams CD that you so kindly contributed to some two years ago. Again, thanks for your generosity and your continued patience while mastering was concluded and a label was finally procured. I haven't been given a release date, but I think it's likely it will be out by this Christmas. Once I receive the stack of CDs, I’ll let everyone know so I can reconfirm shipping addresses before mailing them out to all those who contributed at that price level and above.

For the next two years, many emails went back and forth between Chip, Glenn and me about the status of the recording. Finally, in the Fall of 2017, I emailed this out:

I hope this finds everyone well. It’s been almost three years since all of you so kindly contributed to this important CD and tour project. Your funds made so much possible: mastering the big band CD, supporting the one-month North American tour of concerts and lectures, paying for these great arrangements. Some of the footage from the tour will be posted on YouTube soon. It was a fantastic experience for all involved. I hope all of you have enjoyed the rewards that were sent out in December, 2014.
As I wrote previously, some time ago Motema discontinued the Pepper Adams series. As you may recall, the original fall-back plan was to post the CD at CD Baby, then send you a physical copy. A better strategy was then devised to instead find another label and release the physical CD. If that wasn’t possible, then the University of Illinois’ own label would be used.
After about a year, the folks at Illinois got a deal to release the date on Armored. That was a great plan, and we were all excited and relieved. But there have been delays with that too, mostly costs for packaging that Illinois has been struggling to budget. If you don't know, the state budget of Illinois is in very tough shape. Along with Pennsylvania, the Illinois state university system is weathering severe cuts, more than anywhere else in the U.S. This has slowed the ultimate release even further.
Although I’ve proposed it several times, and it would take only a few weeks to make the date available digitally at CD Baby, it would be an act of bad faith on my part to release it that way and harm Illinois’ market share. We do remain hopeful that the CD can be released this summer, once Illinois sees if any money remains after the semester is concluded. CD Baby always remains a fall-back plan, if Illinois can not get it out, though the likelihood of that is slim. It could still take another year for them, all things considered, to scrape up the packaging costs.
We thank all of you for your continued patience with this. The folks at Illinois were blindsided, and still have to maintain their excellent jazz program. In the meantime, the arrangements you paid for are being played around the world, and Pepper’s music is being heard, thanks again to you! Yet another concert of this great music is scheduled in two weeks at Utah State, with Jason Marshall as soloist. And one of the arrangements, “Doctor Deep,” has been released by Humber College on their label. Humber’s concert was one of the high points of the tour you supported.

Woefully, the recording sat on the shelf for nearly two more years. Finally, it became clear that neither Chip and Glenn’s contacts nor Illinois’ record label was a viable alternative. At long last, in early 2019 the decision was made to have me take over the project and release the recording. Because I was so involved working on my Pepper Adams biography, however, I wasn’t able to address the project until now.
In retrospect, despite all the unforeseen circumstances that caused the seven-year delay, I can honestly say that everyone always preceded with the best of intentions. More importantly, after listening anew with fresh ears, I’m really quite pleased with how the recording turned out. I hadn’t heard it for quite some time, but I think you’ll agree that the charts, solos, and ensemble playing are crisp, spirited, evocative, often downright superb. How can you go wrong with Pepper’s music, and some of Chicago’s finest musicians playing it?

*Two French horn players were added on at least one track.
**Peters and Kuyumjian likely play on only one or a few cuts in place of Gray and Stephens respectively.
***Endres instead of Spencer on “Patrice.” 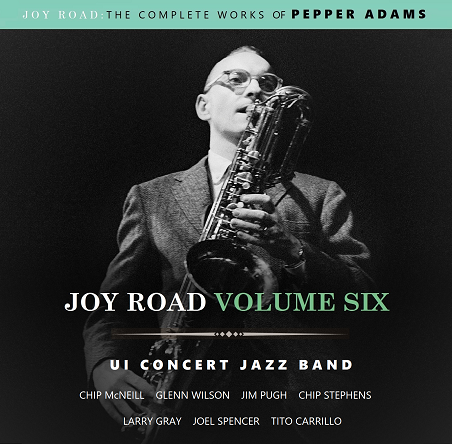 Posted by http://gc-pepperadamsblog.blogspot.com/ at 6:59 PM No comments: