In terms of moving ahead with Adams’s biography, May was quite a productive month and June has started with a bang. The three most important things that occurred were author Mark Stryker reviewing and improving Chapter Four, the discovery of Marc Vasey’s 1985 interview with Adams, and the emergence of Pepper’s cousin, Sandra Adams. Stryker was for years the jazz and arts writer for the Detroit Free Press, who in the last few years of his gig also covered for the newspaper local Detroit politics. Stryker is a wonderful writer who has many years of experience with Detroit’s jazz scene. Last year he published Jazz from Detroit, his account of Detroit’s jazz history. The book includes a number of vignettes about legendary Detroit musicians, though he told me he chose not to cover Pepper in a separate chapter because of restrictions on the length of the book and because of my work on him. Stryker had much to say about my chapter about Pepper and Detroit from 1953 through 1955, and his observations led to some significant corrections. Many thanks to him for improving the manuscript.

For sixty years trumpeter Marc Vasey was involved with jazz, most notably in the Edmonton, Alberta area. During that time, he became very friendly with Pepper, producing many concerts of his there beginning in 1972. In 1985 he sat down with Adams and conducted a far-ranging interview with him, intended for broadcast. I’m only a third of the way through the conversation but it’s already sent me back to the manuscript to add new info and alter some of my text. More, I’m sure, will be added in the next few weeks.

Lastly, thanks to pepperadams.com webmaster Dan Olson, only in the last few days I’ve been put in touch with Sandra Adams, Pepper’s cousin. Sandy is the grandchild of Harry Albert Adams, Pepper’s uncle. She has done considerable genealogical research about her family, and, like Vasey, her recollections sent me back to the manuscript to add color to the text. In the weeks to come, we do hope to post the Adams genealogy that Dan and I have been assembling for some time.

Notes from the first 25 minutes of Marc Vasey’s interview with Pepper Adams, November, 1985. Quotes are from Adams:

Little John and His Merrymen: Essentially, the house band at Club Valley was John Wilson’s band. Wilson was a good lead player who played with Lunceford, though not much of a soloist. 7 pieces: tp, as; ts; bs; plus three rhythm (p; b; dm). Alto was mostly Cleveland Willie Smith, a disciple of Tadd Dameron, who wrote most of the arrangements. Adams wrote a few and Frank Foster wrote some, once he joined the band. Tenor at first was Warren Hickey, who was in one of Gillespie’s first big bands. Yusef Lateef replaced him, then Foster. James Glover was their bassist, who had played with Dinah Washington.

1950s Detroit club scene: “It was then in the process of changing, in that the money was fleeing downtown for the suburbs, and once it got to the suburbs it stayed there.”

On moving back to Detroit after discharge from the army: “It seemed like a good time to accumulate a little money, not a great deal, but enough to get a start going in New York.” Clarinet: “I actually continued playing clarinet much longer than I really wanted to because Thad wrote a few things in my book calling for clarinet. And I hated it. As much as I loved to play clarinet, when you have a baritone book there with about five or six pieces calling for clarinet, no matter how well you warm up at the beginning of the evening, the first piece isn’t going to be called until about three hours later, and the reed has now become corrugated, and the instrument is cold and out of tune. And so that’s no fun at all. Fortunately, clarinets are pretty small and are easy to steal. By the time about the third one got stolen, I convinced Thaddeus it just wasn’t worth it. So since that event, I have happily subsisted with only the one instrument to worry about.”

Leo Parker: “. . . Leo Parker, who I heard live a couple of times. I think he played better than the records tend to indicate.”

Tate Houston: “. . . Tate Houston in Detroit, who was a fine baritone player, a fine soloist. . . .Tate was not very much into harmonic exploration, but just playing the simple changes and playing with good time, which, in itself, was extraordinary on the baritone.”

About his NYC union-card transfer: “For six months you were not supposed to take more than two jobs a week and you’re not supposed to travel at all.” Because he joined Stan Kenton’s band before the six-month period was over, he gave the union Elvin Jones’s address of 202 Thompson Street and asked him to cover for him if and when the union’s representative came around to verify Adams’s whereabouts. On one day, Elvin signed for Pepper when an out-of-shape, exasperated union rep looking for Adams trudged too many times on the same day up to Jones’s apartment on the top floor of a five-floor walk-up.

First NYC gigs: Some were small-group things with Oscar Pettiford.

Charles Mingus: “I would go and work with him for a week or two if he had some extra payroll and could squeeze another horn into a gig and make it a sextet rather than a quintet. I would often get the call because I knew at least some of the music and could figure out enough so I wouldn’t be totally out of place. . . . Some of the bands were fun and some of the music was good, but some of the 45-minute speeches from the bandstand were rather embarrassing. . . . He could be a difficult man to deal with at times.”

Byrd-Adams recordings: “Some of them are not up to the standard that the band played night after night. . . . Blue Note seemed to want to add another horn, so of course it’s not the band that’s working all the time. So we had to write new arrangements and change everything. Blue Note always wanted some things a shuffle, no matter what, on every album, which we were able to avoid on the live album [from the Half Note] . . . to make it commercial. They were very interested in trying to get something that was saleable.”

Duke Pearson Big Band: “Duke Pearson had a really nice band. . . how ill-served that band was by Blue Note. The band only made two albums and neither one really showed how really musical that band is. Each one did have its boogaloo attempt in it, and one of them is really poorly recorded. . . Although each album does have some terrific things in it, neither one shows what a good band that band was. 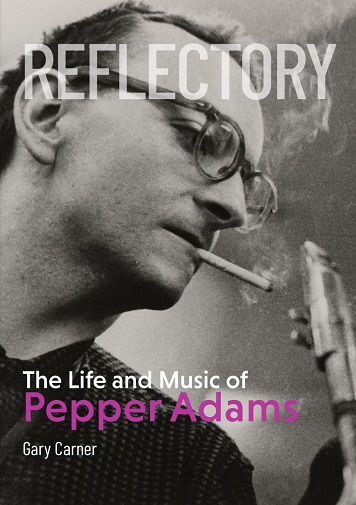 Posted by http://gc-pepperadamsblog.blogspot.com/ at 2:26 PM No comments: